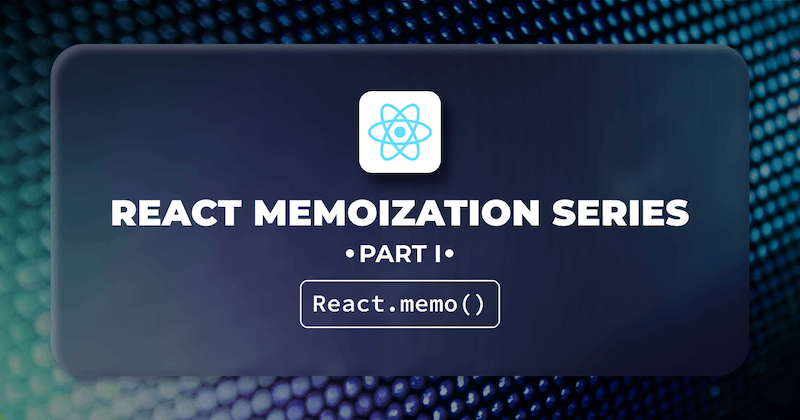 This is the first part of a series on the use of memoization in React. In this series, we'll cover memoizing a React component with React.memo() as well as caching functions and values with React's memoization hooks.

We will begin with a progressive example that involves memoizing a functional component, which will be gradually extended to include use cases for the hooks: useCallback() and useMemo(). useCallback() is leveraged for memoizing a callback function, whereas useMemo() is used to cache a computed value from an expensive function, for example, a sorting function that processes large amount of data.

In this post, we'll demonstrate the use of React.memo(), which is a Higher Order Function, or HOC that adds caching logic to the passed in component. In the upcoming articles, we'll discuss about how to use useCallback() and useMemo().

Memoization is an optimization technique that allows us to store the last computed value or object from a resource-intensive function. It allows us to bypass the function's costly computations when the function is called with the same parameters repeatedly.

In React, memoization is used for optimizing the performance of an app by preventing unnecessary renders of components participating in the component hierarchy and by caching callbacks and values of expensive utility functions.

As React is all about rendering components in the virtual DOM prior to updating the actual Document Object Model in the browser, a lot of memory and time is wasted on useless renderings due to unaccounted for state updates. Using memoization in the right way helps in better use of computing resources in an app.

On the other hand, using it the wrong way can rip us off the benefits. Not only that, on the flip side of unnecessary re-renderings, unnecessary memoization can sometimes cost more than ignoring memoization - eventually hurting performance.

This series is more of a demo than a coding tutorial, as we've made the code already available at the here. All the components have been coded ahead of time, and we'll highlighting on the existing code to discuss different aspects of the above mentioned memoization methods.

We'll follow the impact of memoization mainly from the browser's console.

If you look at the project folder, you'll find out that react-memoization is created using create-react-app.

The app is based on the idea of a list of posts on a blog. There are several components involving a user seeing the latest posts and a list of the user's posts. Allow yourself some time to understand the components individually, their relationships, their state changes, and how props are passed through. It is crucial to pay close attention to how the change of a parent's state triggers re-render of its descendants.

React.memo() is a HOC that memoizes the passed in component. Doing so helps in optimizing its performance by preventing unnecessary re-renders due to state changes it does not depend on, e.g. those coming from ancestor components.

Still building from scratch in 2022?
Meet the headless, React-based solution to build sleek CRUD applications. With refine, you can be confident that your codebase will always stay clean and boilerplate-free. 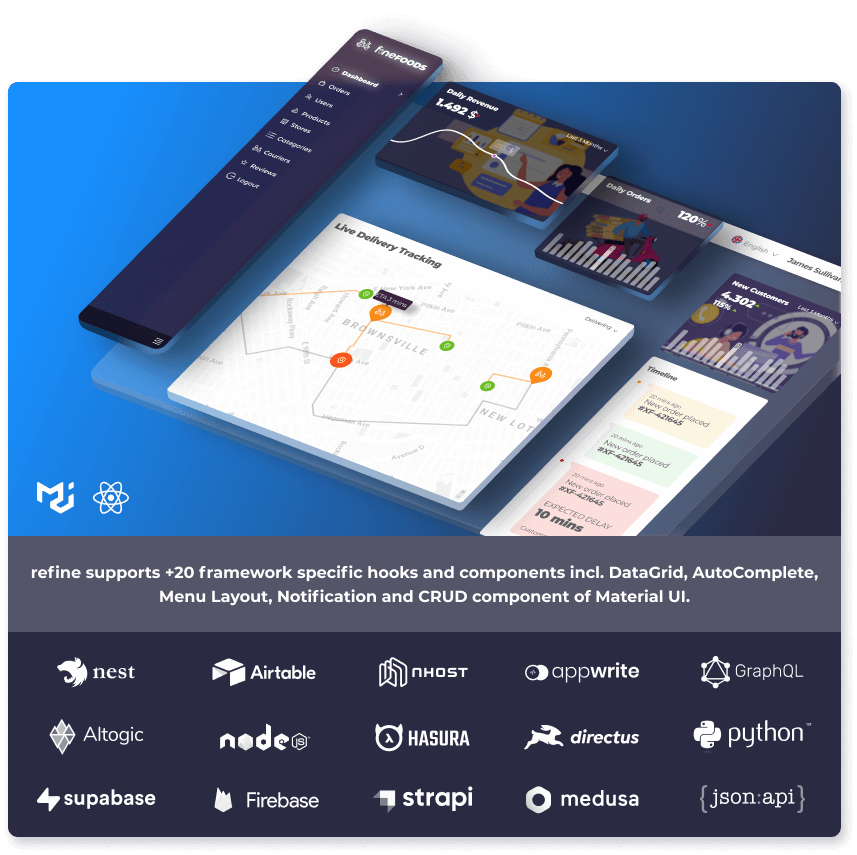 To begin the example, we have an <App /> component that houses <Blog />.

We'll skip both for brevity, but if we look <App /> in the repository, we're storing a signedIn state with useState() hook. We also have a toggler function that alters the value of signedIn.

In the component, we pass signedIn to <Blog />:

We can see that the first item from a sorted array is then passed to <LatestPost /> component along with signedIn.

Then coming to <LatestPost />, it nests the <Post /> component, which we are going to memoize with React.memo(). Let's quickly run through <LatestPost /> in the repository to see what it does.

We can see that <LatestPost /> changes its local state of likesCount every 3 seconds in the useEffect() hook:

Because of this, <LatestPost /> should re-render every 3 seconds. So should <Post /> as a consequence of being a child of <LatestPost />:

As you can see <Post /> does not depend on likesCount but is re-rendered by the latter's change via <LatestPost />. We can see this in the console.

If we check our Chrome's console we have <Post /> rendering again and again following an interval: 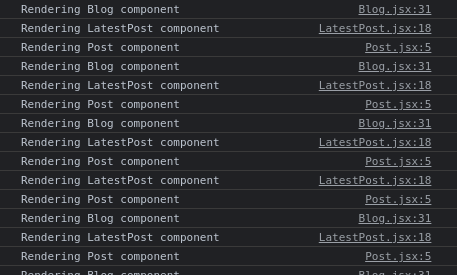 Notice, rendering <Post /> is accompanied by <LatestPost />, so it is consistent that <Post />'s re-renders are happening due to likesCount state changes in <LatestPost />.

They are coming at 3000ms intervals from <LatestPost />'s useEffect() hook.

All these re-renders are futile for <Post /> and costly for the app.

Now, if we memoize <Post /> with React.memo(), the re-renders should stop.

So, in <Post />, let's the component export with the highlighted code:

Looking at the console, we can see that Post is no longer re-rendered at 3s intervals: 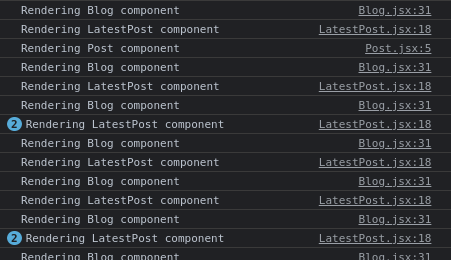 It is clear that memoizing <Post /> reduces the number of re-renders. In a realtime app, this does huge a favor because re-renders due to frequent likes coming in turns out to be very costly for the app's performance.

Now, unlike with likesCount, <Post /> depends on signIn and post. And React memo caches these props and checks for incoming changes in them. Incoming changes to them triggers a re-render. So, altering any of signedIn or post re-renders Post.

If you look at <App />, we see that signedIn originated from there and gets relayed via <Blog /> and <LatestPost /> to <Post /> as props. We have a button in the navbar that toggles the value of signedIn.

Let's try toggling its value to see the effect on memoized <Post />: 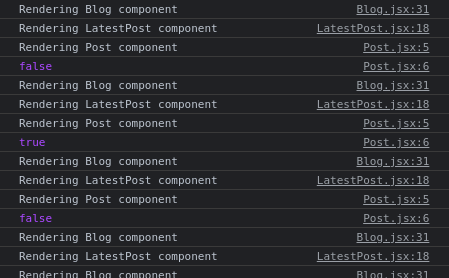 This is because React memo caches the props passed to the component and checks for incoming changes. Do notice the Boolean value of signedIn printed to the console. A change in signedIn 's state renews the memoization and a re-render of the component is triggered.

If value of signedIn never changed, we know <Post /> will never be re-rendered because of signedIn. In that case, caching signedIn doesn't do us any favor.

In our example, had we resorted to React.memo() solely to retain the value of signedIn and not to prevent re-renders due to changes in likesCount or post, we would not get much performance benefit. Instead, we would be bringing the comparison function into the scene for no reason, which adds to the cost. So it is not recommended to memoize a component if its prop values don't change often.

It is therefore important to figure out the performance gains by measuring and analyzing runtime performance using browser utilities like Chrome DevTools.

React memo checks for changes between the previous and current values for a given prop passed to the component. The default function carries out a shallow comparison on each passed in prop. It checks for equality of incoming values with the existing ones.

In our React.memo(Post) memo, the current states of signedIn and post are checked for equality to their incoming states. If both values for each prop are equal, the memoized value is retained and re-render prevented. If they are not equal, the new value is cached and <Post /> re-renders.

It is also possible to customize the comparison by passing in a comparator function as a second argument:

We can specify dependencies for React.memo() and choose to compare only the props we want to: 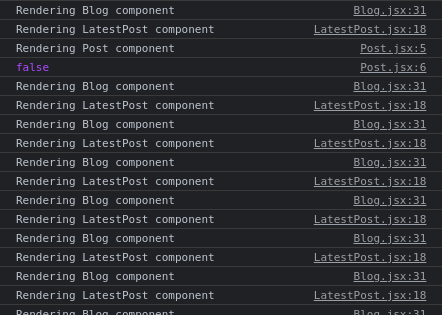 customComparator checks for equality of incoming values of only post with its current value and returns true if they are equal. Memoization will renew if the incoming value of'post` is unequal to its cached value.

In this post, we found out that React.memo() is very useful in preventing unnecessary, frequent re-renders of a component due to changes in states that it does not depend on. A good example involves a component that accepts props whose values change frequently and/or on demand. We can also choose to specify only the props we want in a custom comparator function.

In the next article, we will turn our attention back to the <Blog /> component and memoize a sorting function with useMemo() hook. Abdullah Numan
Fullstack Developer
How to Use JavaScript Array some
October 25, 2022 · 9 min read